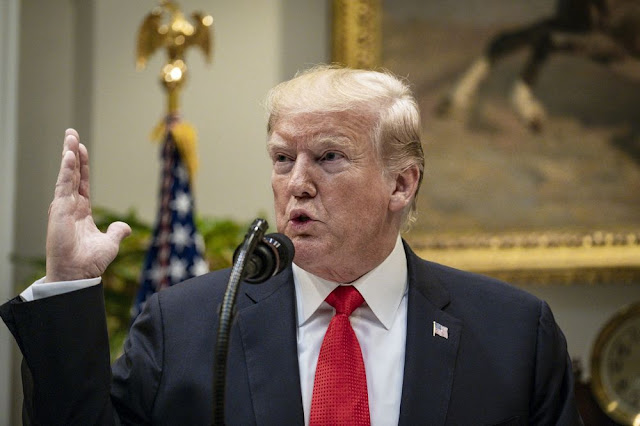 United States President Donald Trump tweeted on Saturday night that he canceled planned peace negotiations with the Taliban after they admitted to carrying out an attack in Kabul in which a US soldier and 11 others died.


"Unbeknownst to almost everyone, the major Taliban leaders and, separately, the President of Afghanistan, were going to secretly meet with me at Camp David on Sunday," wrote Trump. "Unfortunately, in order to build false leverage, they admitted to an attack in Kabul that killed one of our great great soldiers, and 11 other people. I immediately cancelled the meeting and called off peace negotiations."

"What kind of people would kill so many in order to seemingly strengthen their bargaining position?" added Trump. "They didn’t, they only made it worse! If they cannot agree to a ceasefire during these very important peace talks, and would even kill 12 innocent people, then they probably don’t have the power to negotiate a meaningful agreement anyway. How many more decades are they willing to fight?"

One of the blasts took the life of U.S. Army Sergeant 1st Class Elis A. Barreto Ortiz, 34, from Puerto Rico, bringing the number of American troops killed in Afghanistan this year to 16.

Taliban fighters, who now control more territory than at any time since 2001, launched fresh assaults on the northern cities of Kunduz and Pul-e Khumri over the past week and carried out two major suicide bombings in the capital Kabul.

Insurgent groups continue to negotiate with the United States and have demanded that all foreign forces leave.


The United States ended its combat role in 2014, although 20,000 U.S. and NATO forces remain. They still train and support Afghan troops fighting the Taliban who fear being left vulnerable if the United States leaves.

Secretary of State Mike Pompeo refused to sign a peace deal with the Taliban, according to TIME magazine.

The deal would not guarantee the continued presence of US counter-terrorism forces to combat al Qaeda, the survival of the pro-US government in Kabul, or even an end to the fighting in Afghanistan, according to officials familiar with the peace negotiations.

Intercepted communications show that the Taliban "think they have fooled the U.S. while the U.S. believes that should the Taliban cheat, they will pay a hefty price," said the Afghan official.


"There is no agreement to sign yet. If and when there is an agreement that is approved by all parties, including President Trump and if the Secretary is the appropriate signatory, he will sign it," said State Department spokesperson Morgan Ortagus to TIME.