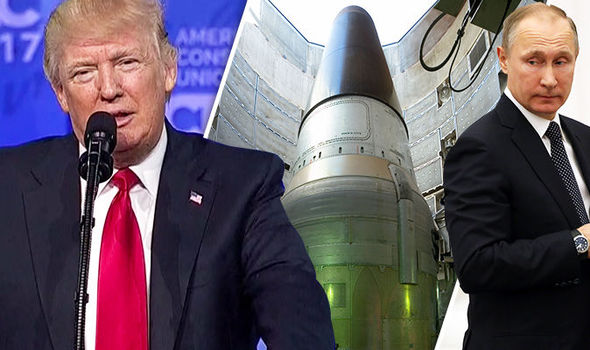 DONALD TRUMP has sent the US Navy and Marine Corps to conduct a month-long war exercise in Alaska to counter the threat of rising Russian and Chinese influence in the Arctic region.


Military activity in the area will be received as a clear indication that the US President is looking to control the region with Vladimir Putin and Xi Jinping in the wings. Russia and China see the Arctic region as crucial to their plans of increasing trade and influence around the globe. US ships will descend on key shipping lanes, taking part in surveillance as well as landing and war exercises. More than 3,000 Navy and Marine Corps personnel will participate in the exercise, along with dozens of vessels, helicopters, planes, and land-based vehicles.

Last month, President Trump expressed interest in buying Greenland, a semi-autonomous Danish Territory in the heart of the contested Arctic region north of the UK, sitting in between Canada and Russia.

Trump said: "We protect Denmark like we protect large portions of the world.

"The concept came up and I said, ‘Certainly I’d be [interested].’

"Strategically it’s interesting and we’d be interested but we’ll talk to them a little bit. It’s not No1 on the burner, I can tell you that.”

"I strongly hope that this is not meant seriously.”


The contest for control in the Arctic has seen Russia, China and now the US flexing their military muscles in a bid to deter rivals from occupying the area.

Russian nuclear-powered submarines – the Tula and the Uri Dolgoruky – fire ballistic missiles in the Arctic Ocean and Barents Sea.

Putin has also deployed a floating nuclear power reactor which is set to operate in view of Alaska.

Putin has already challenged the US and its rivals for influence in Venezuela, siding with controversial President Maduro while Trump still enforces crippling sanctions to pressure the Venezuelan leader out of office.

The Russian President has also caused disruption in NATO, delivering S-400 missiles to Turkey which could compromise the security of NATO's F-35 fighter jet.

Representatives from US Defence claimed that the weaponry in Turkey could be used to collect intelligence on the aircraft that is set to become the cornerstone of NATO states' future operations.

Disputes between Ankara and Washington have since intensified, which could see Erdogan gravitate closer to Moscow.


The US is also involved in a trade war with China. The two nations will meet to discuss trade in October with both economies feeling the impact of the hostility.