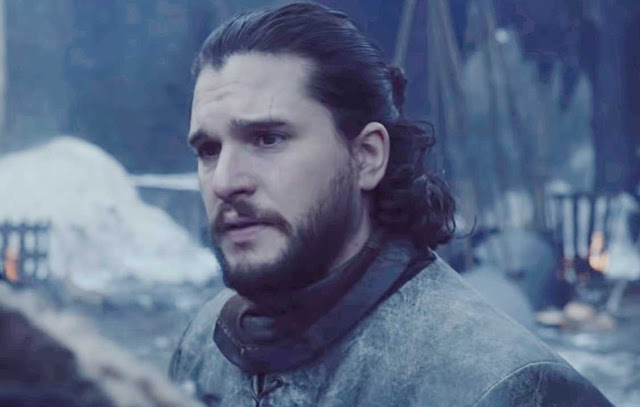 Knowing that the Army of the Undead will be upon them very soon, Tyrion, Jon, Sansa, Arya, Brienne, Podrick, Davos, Tormund, Gendry, Varys, Jorah, Theon, The Hound, Grey Worm and Sam discuss together with the Stark bannermen and Daenerys’s army how they will defend the North.

Allegedly the Last Hearth has already been attacked by the White Walkers and their castle destroyed. Ned Umber didn’t make it out alive. Tyrion speaks for Daenerys, who’s absent due to illness. He comes forward with a plan to defend the North.

Tormund, the remaining Free Folk, the Dothraki, the Unsullied will attack with dragonglass from the Dreadfort since that’s where they are heading to first. On their way to Winterfell, the dragons will set the army of the Dead afire and House Stark’s bannermen and the Knights of the Vale will fight weakened forces at the battlefield of Winterfell and hopefully destroy the Night King as well.

Jon wants Brienne and Podrick to take Sansa, Arya and Bran with them and to leave with Robin Arryn to the Eyrie. Arya doesn’t want to and claims that she’s stronger than most men. They need her in the war to come. Jon insists that he doesn’t want that.


Jorah also wants to fight alongside House Mormont but Lyanna reminds him that he has betrayed his own House. Varys mentions that he has also received word from King’s Landing. Supposedly, Queen Cersei has bought a great army of sellswords and Euron Greyjoy has taken Storm’s End to install the army there. Theon pleads to have Storm’s End attacked and Gendry agrees since it’s the seat of his father’s house.

He needs his help and that of the Iron Islanders as well during the battle at Winterfell. A disappointed Theon accepts his proposal.